Classics for the masses

Yale University Press, 296 blz., gebonden, 2016, ISBN 9780300217193
Musicologist Pauline Fairclough explores the evolving role of music in shaping the cultural identity of the Soviet Union in a revelatory work that counters certain hitherto accepted views of an unbending, unchanging state policy of repression, censorship, and dissonance that existed in all areas of Soviet artistic endeavor. Newly opened archives from the Leninist and Stalinist eras have shed new light on Soviet concert life, demonstrating how the music of the past was used to help mold and deliver cultural policy, how “undesirable” repertoire was weeded out during the 1920s, and how Russian and non-Russian composers such as Mozart, Tchaikovsky, Wagner, Bach, and Rachmaninov were “canonized” during different, distinct periods in Stalinist culture. Fairclough’s fascinating study of the ever-shifting Soviet musical-political landscape identifies 1937 as the start of a cultural Cold War, rather than occurring post-World War Two, as is often maintained, while documenting the efforts of musicians and bureaucrats during this period to keep musical channels open between Russia and the West. 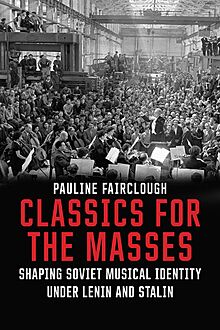