After '89 takes as its subject the dynamic new range of performance practices that have been developed since the demise of communism in the flourishing theatrical landscape of Poland. The theatre has subsequently retained its historical role as the crucial space for debating and interrogating cultural and political identities.

Providing access to scholarship and criticism not readily accessible to an English-speaking readership, this study surveys the rebirth of the theatre as a site of public intervention and social criticism since the establishment of democracy and the proliferation of theatre makers that have flaunted cultural commonplaces and begged new questions of Polish culture. This book suggests that a radical democratic pluralism is only tenable through the destabilisation of attempts to essentialise Polish national identity, focusing on the development of new theatre practices that interrogate the rise of nationalism, alternative sexual identities and forms of kinship, gender equality, contested histories of antisemitism and postcolonial encounters. A new theory of political theatre is elaborated as part of the public sphere.

It is argued that the most significant change in performance practice after 1989 has been from opposition to the state to a more pluralistic practice that engages with marginalised identities purposefully left out of the rhetoric of freedom and independence. This book will appeal to both academics and students in theatre and performance studies and Eastern European studies. 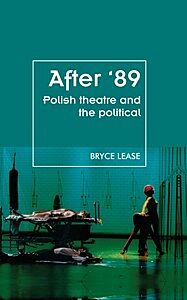