Greetings From The Barricades

Amid the chaos and violence of the 1905 Revolution in Russia, the Tsar's opponents printed and distributed vast quantities of picture postcards.

Easy to share, hide and smuggle, postcards were a way to beat the censor and spread a message of defiance. Produced by a diverse set of revolutionaries, liberals and opportunists, the content of these cards is equally wide-ranging: from satirical caricatures directed against the government to rare photographs of revolutionary demonstrations. Many of the cards are darkly humorous, combining laughter with a sense of raw indignation at the injustices of Imperial Russia. Greetings From The Barricades is the first major study of the design, production, and distribution of these cards, featuring over 200 images. Together, they form a rich body of political art that illustrates the danger of opposing the regime during this turbulent era. 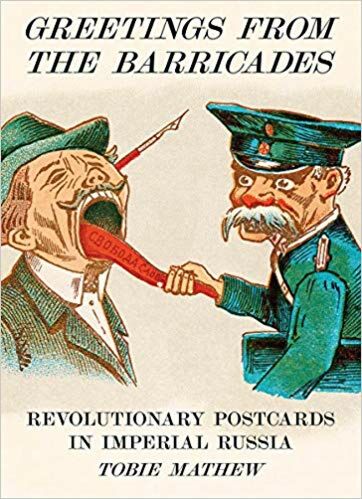