How Russia Learned to Write

Literature and the Imperial Table of Ranks
Reyfman, Irina

University of Wisconsin Press, 224 blz., paperback, 2021, ISBN 9780299308346
In the eighteenth century, as modern forms of literature began to emerge in Russia, most of the writers producing it were members of the nobility. But their literary pursuits competed with strictly enforced obligations to imperial state service.

Unique to Russia was the Table of Ranks, introduced by Emperor Peter the Great in 1722. Noblesse oblige was not just a lofty principle; aristocrats were expected to serve in the military, civil service, or the court, and their status among peers depended on advancement in ranks.

Irina Reyfman illuminates the surprisingly diverse effects of the Table of Ranks on writers, their work, and literary culture in Russia. From Sumarokov and Derzhavin in the eighteenth century through Pushkin, Gogol, Dostoevsky, and poets serving in the military in the nineteenth, state service affected the self-images of writers and the themes of their creative output. Reyfman also notes its effects on Russia’s atypical course in the professionalization and social status of literary work.
Op voorraad
€ 28,00
Ga naar het einde van de afbeeldingen-gallerij 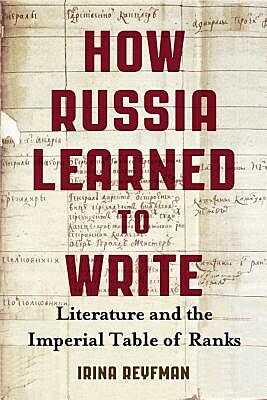