The impressionism of Chekhov
Katyk-Lewis, Nadezhda

The Impressionist quality of Chekhov’s writing, recognized from the beginning, is in this work tested against the specific features of Impressionist art. The work’s historical perspective elucidates the decisive impact of the era on the Impressionists and on Chekhov: both focused on the modern, constantly changing world. Extensive analysis of Chekhov’s text and Impressionist paintings is the basis for defining specific parallels in their thematic, stylistic, and ideological aspects.

Chapter 1. “Themes” Consists of four sections. The first, “City,” is focused on Chekhov’s stories of Moscow, describing a market or a little shop as a counterpart to the Impressionist paintings of Paris, and as a contrast to the dull provincial life. The second part, “Entertainers,” deals with the world of theaters and actors in Chekhov, a common subject also of the Impressionists. The third, “Countryside,” deals with the historic changes taking place at the time in both France and Russia, with trains bringing middle-class people to the outskirts of cities, as described in numerous stories of Chekhov with the subject of the “dacha,” and as depicted in the Impressionist canvases of picnicking and boating. The last part, “Train,” analyzes the new phenomenon of the railway as an element of progress as well as an intrusion into the peaceful, serene countryside.

Chapter 2. “Sketch” Deals with the stylistic features of Chekhov, his brief, concise language that generates the perception of his descriptions as being “vague” or “unfinished.” This quality is compared with the Impressionist technique of broad synoptic brushstrokes that create the appearance of the unfinished surface of the canvas -- a sketch, presented by the artists as the final result of their work. The first part of the chapter, “Landscape,” analyzes this feature based on depictions of nature. The following part, “Envelope,” points out the importance of the atmosphere and aromas in Chekhov, which often replace descriptions of the environment itself, creating a misty, ephemeral effect like the objects in Impressionist paintings with no contours, blurred by the air that surrounds them as an envelope. The last part, “Portrait,” documents the same artistic method applied in Impressionist paintings to figures, and by Chekhov to the portraits of his literary characters.

Chapter 3. “Fragment” Further extends the principle of “unfinishedness” with the concept of “incompleteness” as the formal aspect of the structure of Chekhov’s work as well as of the Impressionist paintings. The fragmented composition of Chekhov’s stories, with missing beginnings and endings, also substantially alters in his work the traditional siuzhet, its content and tendency, which is also the case with Impressionist art. The second part, “Randomness,” is focused on the consequence of such a composition, the rupture of order, which brings into the work random or superfluous details, listed with indignation by critics of Chekhov and of the Impressionists. The last part, “Lonely Man,” deals with a social and psychological phenomenon of the era -- a lonely crowd or a lonely man, isolated in the growing city, as depicted in Impressionist paintings as well as in Chekhov’s stories and plays.

Chapter 4. “Reflection” Covers the opposing effort to find a sense of wholeness in closeness and unity with nature. The Impressionist poetic gardens and figures blended into the landscape have their counterpart in Chekhov’s work in the interaction between characters and nature. The extensive presence of water in Impressionist painting, reflecting and repeating everything, conveys the artists’ belief that nature is one entity, which is also Chekhov’s philosophy expressed by similar means. The ultimate Impressionist preference for the reflection over the reality appears in Chekhov as the question of the true identity of his characters. Looking at their reflections in a mirror or in the eyes of another person, they contemplate and negotiate their self-identity. Such an approach is Chekhov’s artistic method of presenting his literary characters not as personalities with solid permanent qualities, but as their self-identity based on a reflection.

Chapter 5. “Truth of a Moment” Summarizes the Impressionist denial of the philosophical concept of absolute truth predominant in Realist art, replacing it with a new vision of the world in constant evolution. This is expressed by the Impressionist serial paintings, capturing the momentary appearance of a subject such as a haystack or a cathedral. In Chekhov this principle is expressed again through his characters, who instantly alter their behavior according to each new situation. The ability of Chekhov’s characters to adapt to a social milieu or other circumstance, typical already of his early stories, gains a more complex form in his later works. Under the light of a new, different situation Chekhov’s characters suddenly reveal a new, different side of their personalities; instead of a psychological process, they undergo a transformation in an instant, in a moment of truth. In this as in so many other ways, comparison of Chekhov’s text with the paintings reveals analogous artistic and literary devices, and the same philosophical concept of truth, as the core of Chekhov’s Impressionism. 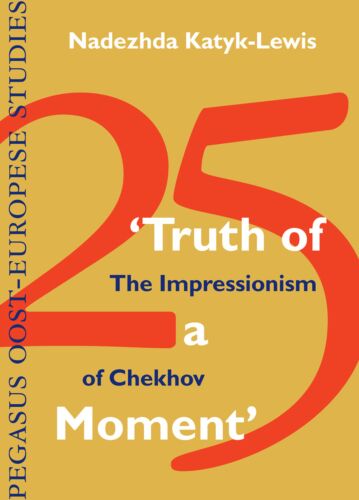